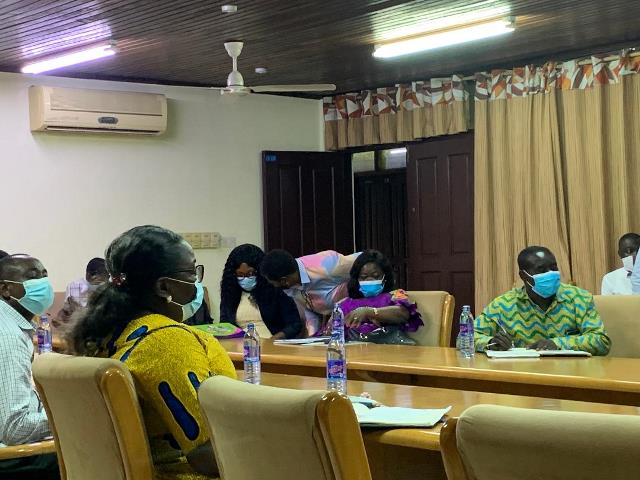 Accra, Aug 20, GNA-Dr. Kwaku Afriyie, the Minister for Environment, Science Technology and Innovation (MESTI) has urged institutions of the Council for Scientific Industrial Research (CSIR) to popularize their innovations and food products to gain public trust and confidence.
“You need to let people know the good stuff you are doing…Once these technologies and innovations, which include; food and animal value addition products, farming technologies, simple implement, the building becomes known and people get used to it they will not opt for foreign ones,” he said.
Dr Afriyie said when he led a delegation from MESTI to pay a familiarisation visit to the Food Research Institute-CSIR and CSIR-Institute of Industrial Research in Accra.
He explained that the 13 institutes had developed commercially viable technologies and food products when up-scaled could serve as import substitute and save the country high import costs.
“Foreign products have flooded our market meanwhile an institute like the CSIR-FRI, has produced breakfast cereals, cassava products, aflatoxins free-groundnut past, palm oil, vegetable oil and flour that are of high quality, healthy as well as organic.
“Food is an issue of security. The sovereignty of any country lies in her ability to feed herself and indeed become self-sufficient, the basic food staples not to be left for other countries. Do not keep your innovation to yourself, take the initiative and make commercial to facilitate development”.
The Minister observed that most farmers face production challenges, including; diseases, pests, poor planting materials, limited irrigation, and low application of technologies, post-harvest losses, lack of value addition and lack of market access.
He charged the leadership of the CSIR and other Research and Development institutions to take steps to strengthen their institutional linkage to address the challenges as core part of their mandate.
Dr Afriyie mentioned that in line with the policy of championing development through Science, Technology and Innovation, the government was taking steps to improve funding of scientific research and its infrastructure to enable the CSIR to continue to deliver.
He said the government was also taking practical and deliberate steps to ensure that post-harvest management was integrated into all its agricultural programmes.
Professor Charles Tortoe, the Director CSRI-FRI briefing the officials reiterated that the institute had the task to conduct applied market-oriented research into problems of food processing and preservation, food safety, storage, marketing, distribution and utilisation.
The institute, he noted had the mandate to ensure national food and nutritional security in support of the food industry and also to advise the government on its food policy.
According to Professor Tortoe the institute had developed technologies and transferred for the production of several new convenience foods, which were either adequate alternatives to imported materials.
“These include; Root and Tuber-based convenience foods such as fortified gari, improved kokonte flour, agbelima flour and fufu powders as well as cereal/legume-based convenience foods such as Dehydrated Fermented Maize Meal, High protein Infant Weaning Foods, Composite Flours, and High-Quality Legume Flours,” he said.
Professor Tortoe said to reduce the nation’s import of wheat flour matrons, bakers, and caterers in Central, Western and Greater Accra regions of the country had been trained in the use of alternative flours such as high-quality cassava flour, yam flour, cocoyam flour, potato flour, and cowpea flour.
He disclosed that over 90 industries, enterprises benefit from the regular analytical services of the Institute and support large companies such as UNILEVER in pilot-scale development and production of new foods over the past ten years.
The Director said the Institute had designed and constructed high-performance hot air dryers, flour sifters, cassava graters, hammer mills, and other food processing equipment that had helped local food processing industries to establish their businesses while saving on imported alternatives to these equipment.
”A number of potential local entrepreneurs have been trained in technologies developed by the institute. These technologies include fish smoking, fruit and vegetable processing, salt Iodation, mushroom production, cassava processing, soy milk, and soy flour production,” he said.
“Most of the trainees have set up businesses based on the technologies and are producing to meet the needs of both the local and export markets. The result is that jobs have been created, foreign exchange is earned and the livelihoods of people improved”.