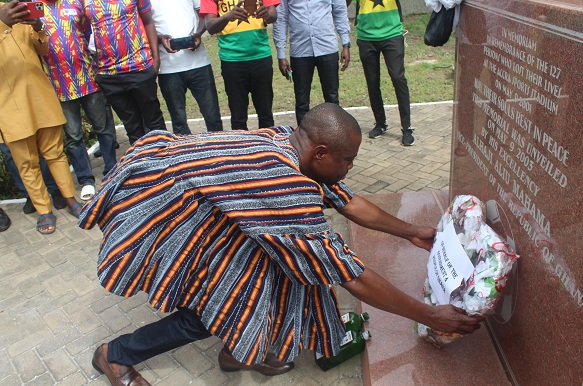 Accra, May 9, GNA – Mr. Evans Opoku Bobie, the Deputy Minister of Youth and Sports (MOYS), has condemned the recurrent incidents of hooliganism at various league centres, saying that lessons have not been learnt from the unfortunate May 9 stadium disaster.

The MOYS, in collaboration with the National Sports Authority (NSA), marked the 21st commemoration of the May 9th football disaster that claimed 127 lives at the Accra Sports Stadium during a midweek league match between Ghanaian footballing giants , Accra Hearts of Oak and Kumasi Asante Kotoko.

This year’s commemoration, which was under the theme « Never Again, » saw football stakeholders, including fans and football officials, among others, lay a wreath at the May 9 statue at the Accra Sports Stadium on Monday.

Mr. Opoku Bobie, delivering the keynote address on behalf of the Sector Minister, Mr. Mustapha Ussif said the commemoration was important for us as a nation as we reflect on the losses and sympathize with the bereaved families.

« This is arguably the darkest day in Ghanaian football history, and we pray that this tragic incident that claimed 127 lives 21 years ago never happens again.

« Our local football matches have been recording incidents of assault and indiscipline in some league centres and quite recently issues relating to match fixing which has the tendency to fuel spectator agitation.

« If these unfortunate issues are not addressed as a matter of urgency, it may lead to undesirable situations which may include the loss of lives and I want to use this platform to condemn these unfortunate reported incidents, » he said.

He further noted that the Sports Ministry would continue to engage the National Sports Authority and the Security Agencies to ensure sanctions are taken against individuals that are found culpable.

Mr. Prosper Harrison Addo, the General Secretary of the Ghana Football Association, in his remarks, said the commemoration of May 9 was very vital as the football fraternity reminds itself of the unfortunate event so that it would not be repeated.

He stated that even though there were measures to deal with issues of hooliganism, clubs had to be watchdogs to call out individuals who indulge in some negative acts for necessary sanctions to be taken.