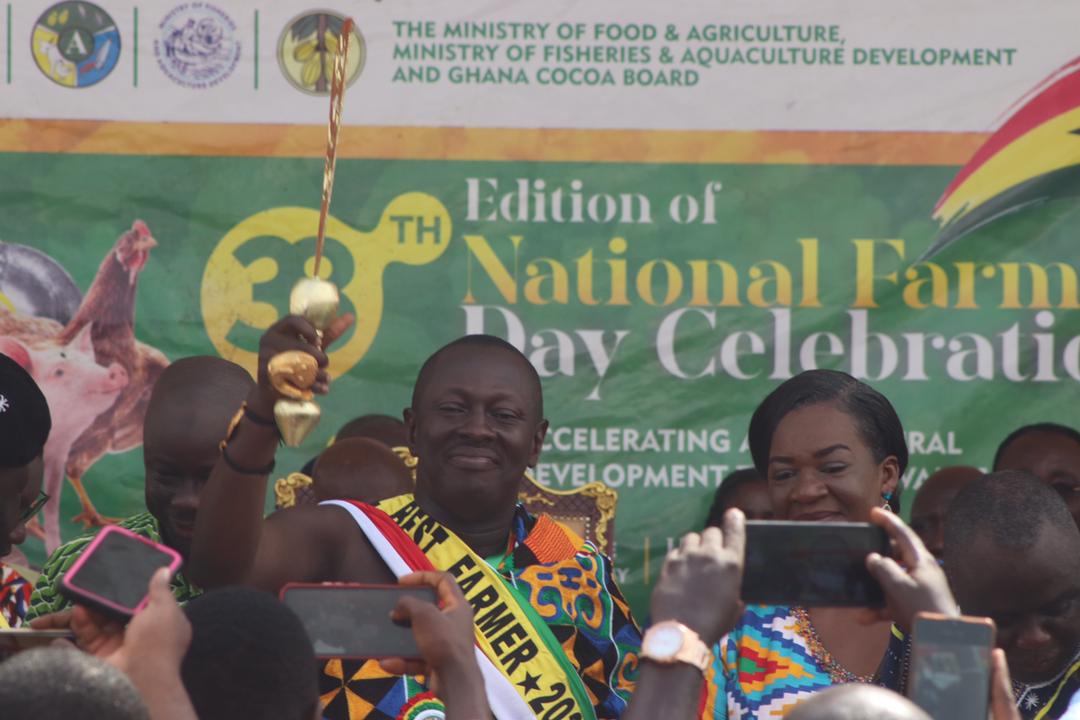 He was crowned at the 38th National Farmers’ Day Celebration, held under the auspices of the Ministry of Food and Agriculture (MoFA), at the Jubilee Park, Koforidua, the Eastern Regional capital.

The award-winner took home a cash prize of one million Ghana Cedis, tractor with implements, trailer, Boom sprayer, and other souvenirs.

Nana Sarpong Siriboe has a 900-acre oil palm plantation, 200-acres of maize, over 17, 000 poultry birds, as well as several livestock and acres of cocoa, cassava cashew, mango and cowpea farms, with a total workforce of 145.

Mr. Seth Agyei Fosu, also a mixed farmer based in the Kintampo-North of the Brong-East Region, took the First Runner-Up position, and received a tractor, trailer, Disc Plough and Boom Sprayer.

Professor Akwasi Asabere Ameyaw, a mixed-farmer based in the Techiman-North of the Brong-East Region, emerged as the Second Runner-Up (Overall National Best Farmer), and was given a tractor with implements.

A total of 15 awards were given at this year’s ceremony, held on the theme, “Accelerating Agricultural Development through Value Addition.”

They received various souvenirs for distinguishing themselves in their respective fields of agriculture.

President Nana Addo Dankwa Akufo-Addo, delivering the keynote address, commended Ghanaian farmers for their commitment and resilience to feed the citizenry in the face of the global economic and food crises.

The Government, he said, would continue to support them with the needed incentives and policies for increased productivity.

He announced that his Administration had since 2017 provided more than 2 billion Ghana Cedis in subsidies to enable the farmers acquire fertilizers and improved seeds needed for their work.

The objective, according to him, was to empower the farmers to achieve their targets for food sufficiency.

President Nana Akufo-Addo indicated that agriculture remained a priority of his Administration, therefore, the necessary measures and initiatives were being put in place to foster agro-processing and value addition for the benefit of the Ghanaian farmer.

Dr. Owusu Afriyie Akoto, Minister of Food and Agriculture, commended the farmers for their efforts, saying the Ministry would continue to liaise with them, and implement the best of policies in their favour.