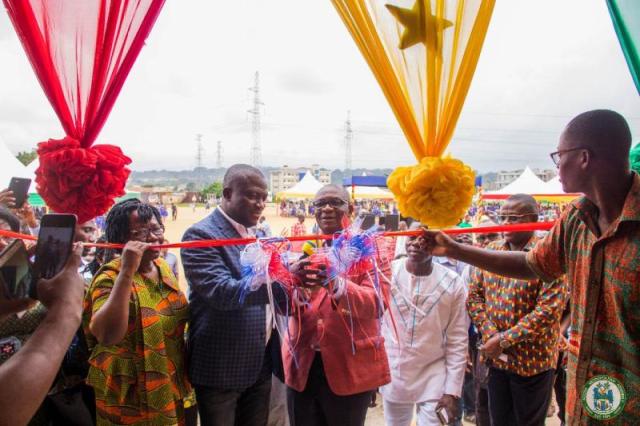 The school infrastructural development projects are being funded by the World Bank through the Ministry of Local Government and Rural Development under the Urban Development Grant.

Mr Sowah in an address said the provision of the infrastructure would eliminate the double shift system, improve teaching and learning environment, increase school contact hours between teachers and children and improve sanitation as the buildings had in-built washroom facilities.

He said the school projects were unique and distinct as each came with a kindergarten block and a three-storey 18-unit classroom block with ancillary facilities such as; a science laboratory, computer laboratory and a library to enhance teaching and learning.

Mr Sowah said: « The completion of these projects have come as no surprise to me because as a young man, I have always believed in education and therefore just after assuming office as the City Mayor, I took adequate steps together with my team to get these projects completed on time. »

The AMA Chief Executive expressed the hope that with the provision of the educational infrastructure enrolment of school children would increase and their academic performance would improve significantly in the coming years.

He reiterated his commitment to support President Nana Addo Dankwa Akufo-Addo for the realisation of the full potentials associated with the implementation of the laudable Free Senior High School programme and gave the assurance that the AMA would ensure the completion of the other on-going school projects and that within a couple of weeks six more of the Accra City Schools would be inaugurated.

Mr Sowah charged the school authorities to take good care of the facilities, adding that he would take keen interest in the regular maintenance of the schools and expressed gratitude to the World Bank for its immense support and also the Ministry of Local Government and Rural Development for their supervisory role in the execution of the projects.

Mrs Margarette Frimpong Koree, the Accra Metro Director of Education in her welcoming address said education was key to success in life and that the government was making the school environment clean and conducive for teaching and learning by providing the necessary infrastructure.

She said the government was committed to ensuring that the school became the centre of excellence and advised the children to take advantage of it to improve on their learning capabilities.

Mr Emmanuel Boakye Agyarko, the Member of Parliament for Ayawaso West said the government was playing its part by providing school infrastructure and that it behoved on parents to enrol their children in school.

He said it would be a dereliction of responsibility, if parents failed to play their part by ensuring that they provided the necessary educational support to their children.

Mr Agyarko advised the school children to take their studies seriously to become successful in future.