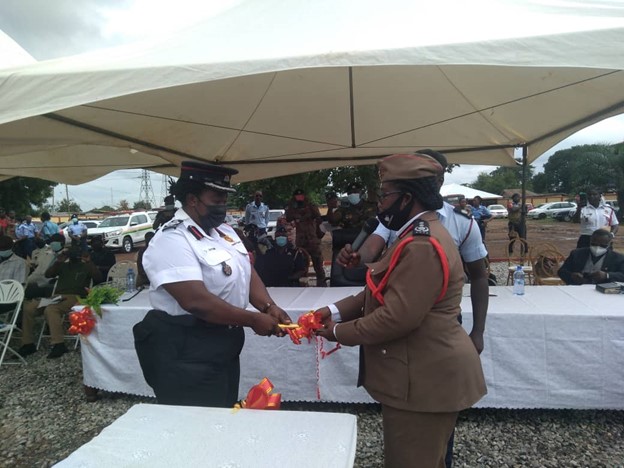 By Regina Benneh, GNA
Sunyani, June 18, GNA – Assistant Chief Fire Officer, (ACFO) Olivia Ayem, the new Bono Regional Commander of the Ghana National Fire Service (GNFS) has appealed for the cooperation of the public to prevent bush fire incidents in the country.
She made the appeal in an interview with the media after Deputy Chief Fire Officer (DCFO) Heroine Sekyere Boakye who had served two years as the Regional Fire Commander handed over to her at an impressive ceremony in Sunyani.
ACFO Ayem said the Bono Region with farming as a predominant occupation needed all hands on deck to protect farms and other properties from the menace of bush fires and other fire outbreaks so that investments of farmers and other property owners would not be in vain.
She said “fire is a good master but can also be a very bad master if not properly managed”, saying there was, therefore, the need for constant education to remind the general public about its dangers to prevent loss of lives and properties.
ACFO Ayem said her vision for the region was not different from that of her predecessor and announced she would be forming fire prevention clubs in the schools to inculcate in the pupils and students the significance of fire prevention for them to develop and nurture the interest of becoming firefighters.
Earlier in an acceptance speech ACFO Ayem thanked her predecessor for the commitment and good work done to uplift the image of the Service in the region and promised to maintain the standard set by her predecessors and even go the extra mile to achieve more.
She appealed to the personnel to accord her maximum support by working in unity to attain greater success in saving lives and properties.
DCFO Boakye commended the regional fire staff for their dedication and sacrifices which helped greatly to reduce incidents of fire outbreaks during her tenure and expressed the hope that they would do even better for her successor to achieve even greater success.

Do not draw police officers into land litigation