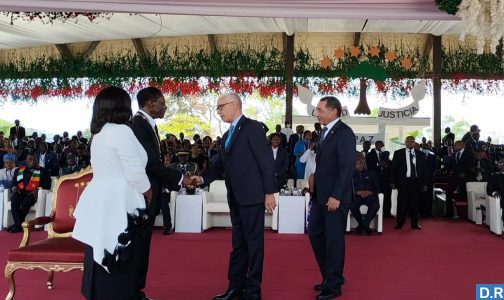 Rabat, 08/12/2022 (MAP) – Upon High Royal Instructions, the Speaker of the House of Representatives, Rachid Talbi Alami, represented HM King Mohammed VI at the inauguration ceremony of the President of the Republic of Equatorial Guinea Teodoro Obiang Nguema Mbasogo, held Thursday in Malabo.

In a statement, the House of Representatives said that Talbi Alami was received by the President of the Republic of Equatorial Guinea, who stressed that the two countries are bound by historical, close and multidimensional relations of friendship.

The President of the House of Representatives also met with government officials of the Republic of Equatorial Guinea, including talks with the Vice-President of the Republic, and members of the government, namely the Secretary of State for Foreign Affairs, the Secretary of State for Public Affairs and the Minister of Justice. He also met with the Speakers of the Parliament of that country, the same source said.

The investiture ceremony was also an opportunity for Talbi Alami to discuss and hold meetings with many leaders of countries and heads of governments and legislative institutions, in particular the President of the Congo, Burundi, Central Africa, São Tomé and Príncipe, the Nigerian Prime Minister, the Speaker of the Parliament of Comoros, the adviser to the Egyptian President and delegations from Qatar and the Kingdom of Saudi Arabia.

The Ambassador Extraordinary and Plenipotentiary of the Kingdom in Equatorial Guinea, Ghallam Michane, was Also present at the inauguration ceremony.